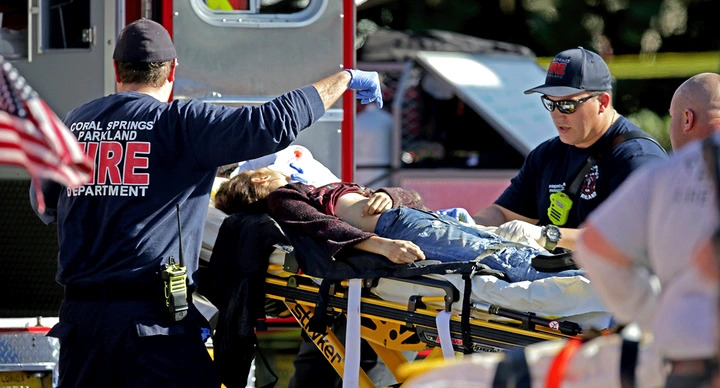 And then the bullets start flying. Children die. The police show up. News catches wind. And then the cycle simply continues. 17 teenagers are dead. Seventeen. Seven futures taken away by the selfish and unwarranted aggression by a single, stupid person.

And Congress just sits there, powerless to do anything because the NRA keeps cock blocking them on passing some much needed legislation regarding stricter gun control laws. Maybe it’s time? Maybe this time is the right time to have this very uncomfortable conversation about tightening up laws regarding the sale and use of firearms in America, when clearly, so very clearly, we absolutely need to have this discussion, even in the face of political aggression by the National Rifle Association.

This is no longer about the mentally ill carrying out the attacks, whether or not it was purchased legally or found on the corpse of a crackhead who overdosed. When lives of students, high school students, especially high school students or younger, are put in jeopardy or lost due to gun violence erupting out of no where? This is the time to have that very important discussion about how far the Fifth Amendment can be stretched.

200 years ago, when America was still being settled, and the wilds of our countries citizens were still being very much tamed, yes. Guns were a very much and very necessary part of life for survival. But now? In 2018, when we are at nearly the peak of civilization as we currently know it? No, we don’t need guns in the public’s hands, not in an era of Social Unrest stemmed by a very shifty president. Not when everything and anything can set a person off, not when grudges are held, sometimes till a very real and sometimes fatal occurrence happens because of a video game interaction, not when there have been seven mass shootings in the last month alone.

And most certainly, not on Valentines Day.
A holiday most associated with love, togetherness, the growing positive emotional outburst.

Was this a crime of the heart?
A jilted lover?
A rejected advance?
A former student, theoretically named Nicholas Cruz, for whatever reason, decided to take the lives of 17 students at Marjory Stoneman Douglas High School. Why? What was the reasoning? Why is the question, it’s not what he did, it’s not how he did it, we know how he did it, Nicholas got a gun, walked on campus, pulled the fire alarm, took aim, and pulled the trigger.

Last week, a 19 year old fucked a dead girl, broke her legs so she’d fit in a plastic crate, made it look like she ran away, and bragged about it to his friends and co-workers.

The week before that, Logan Paul tasered a dead rat.

Clearly, the spring has been wound too tightly, the tension has grown so much, the storm of madness is slowly leaking out and it’s causing people to lose their damned minds, and commit acts of such insanity, such high levels of cruelty, such deep levels of depravity, that no one knows what exactly to do.

16 dead.
A rat tasered.
A dead girl fucked then folded like a lawn chair.

These are the low points in our countries history, at this moment. It doesn’t matter the political spectrum in which you sit. It doesn’t matter. We need change now, we’ve now breached into a new level of outrageous, when mass shootings aren’t the only things making headlines. Is necrophilia and animal cruelty going to become the new norm now? Are we going to just keep allowing this kind of shit to happen, over and over and over again until it just becomes so much that we’re passed the point of no return?

I love this country, born and raised in the good old United States America, but lately? America is slowly becoming a scary place, a place where anyone can achieve whatever they want. Good, bad, ugly, or just plain insane.

When will change happen?
Who will finally step up to the plate and simply neck snap the mass shooter on live TV to show that enough is enough?
Or rather, the question… it isn’t who….
But Rather when?

Author, Youtuber: YT/dr3arms, Universal Receiver at Amazon, all around chill guy, I talk about trendy things and mocha lott- LIES! I talk about whatever I want. Lol? View all posts by Morgan Gavin