Some days aren’t great, but I ain’t about to fuckin talk bout that shit, let everyone talk about that shit, Imma talk about… well, now I can’t rightly say, or maybe I can, but I don’t want to, so I might not be able to say what I was about to say before the moment where I could’ve said something about something else but now, this is just a recurring loop of broken ideas and stupid logic.
Everyone has stupid logic.
Even birds.
Yes birds, birds have stupid logic.
Not like stupid human logic, but stupid bird logic.
Squirrels are just fucking stupid, regardless of level of intelligence. But don’t discount sharks.
Fuck sharks.
And spiders.
And clowns.
Actually, fuck any and all combination of the three of those things, because any and all of them are just bad.
really bad.
So bad it makes you think that no matter what, you’re about to find out some shit that don’t make sense, but desperately need to because in a way, Earnest Hemingway did not drink enough.
But then again, stupid Squirrel logic infects everything we do on a level never before seen.
I have not zoomed out.
Not, I have zoomed out, don’t ask why I haven’t zoomed out, maybe I was zoomed in?
Maybe I wasn’t? Maybe I couldn’t be zoomed out or in to save my life, or maybe there’s a need to be more zoomed in than out in this day and age where being zoomed in has more an impact meaning than one would assume.
But you know what they say about assuming things, right?
That donkey’s shouldn’t speed.
Or drive. But they do anyways, because there asses, and they’re a danger to you and me on the road.
Ass Zooming. that’s assuming they know how to drive using those clods hoppers of a hoof on their feet.
But they only have one hoof between all four feet.
Well, they might be transformers.
Hey, we live in a day and age where anyone can be anything or any gender they choose.
I once dated a woman who identified as a ketchup bottle.
Which made sense in a weird way, a way I leave to your imagination, because that’s the kind of logic we’re dealing with here today.
Stupid squirrel spider shark clown bird logic.

Where do I begin? Shit, where the fuck do I begin? normally with this kind of thing I’d have some kind of reference point to where things getp retty fucking awkward, but this is me we’re talking about, and that usually means we start at the very fucking beginning of this fucking train wreck known only as my love life.

Well, let’s skip all that, shall we? anyways, I first started working with MetroPCS at the Main and Maple location, there was Kate, a woman that I fell hard for, but I got a bit too much with the texting and totally forgot about her fear of phones, then she friendzoned me, immediately before I friendzoned her. took a while to get over her, not sure how she feels about me, but in some weird way, we’re almost exactly alike, only she has boobs and the predictable ability to talk about Power Rangers stuff till the cows come home. though she is pretty damned cute… I think. anyways, shortly after that, we didn’t talk for a while, she waved on her corner and I waved on my stretch of side walk.

then for some reason, she started talking to me again, but I grew out of whatever fascination she held for me. Anyways, after that, this one woman  and I would chit chat for a bit before she ran across the street like some live version of leap frog. Which I still don’t get, but whatever, might’ve been the balloons.

Or not, anyways, for a while we kept chatting off and on, and then, she just stopped coming by. anyways, I just kind of drifted from one thing to the next thought wise and pattern wise as well, sometimes I would just hit the 99 cent store and snag a watermelon because those bastards were 79 cents and who the fuck am I to be denied such sweet, blissful happiness!? Anyways, with Kate being super shy but awesomely cute, and the next woman in line being a ghost, and my next choice knocking out watermelon with delicious Subway Meatball sandwiches, I met three other women, Chy, and the other two.

don’t look at the monitor like that! Anyways, gradually, over time, we talked, became friends, and all that. Weird thing, I can never get these women to meet me outside of work, I might have some deep seated self confidence issue… more on that later. Anyways, chy turned out to be gay, or maybe she told me that so I’d knock it off flirting with her. Meh, either case, I’m not that worried about it anymore. should I be? I’m not going to freak out over it. Anyways after that, I finally noticed this one short woman flitting about the parking lot every fifteen to twenty minutes. Shut up, only so much time that music and memories can burn off before the outside world invades your mind like a hookers rapid spread of crabs at a burning man gathering. 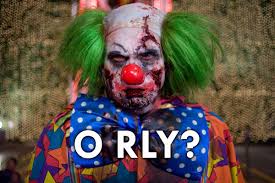 Yes, RLY gross zombie clown. Yes, RLY. Anyways, I asked my friend about her, and he told a little bit of her back ground. Another few weeks passed when I finally managed to talk to her a little bit. She showed me some art work, and I said I’d bring my sketch book with me so that way I could show her some of my work. Which, a few days later and some asking around, I was able to do. We had a great conversation and apparently I missed the open door and slammed right into the wall because she gradually started avoiding me, or maybe it was just bad timing over all, I dunno. timing is everything. Anyways, I started feeling like crap but wound up pretty damned happy every time I talked her for.

that brings us up to speed, recently, I learned she was moving out of the High Desert, while I am happy for her finally getting out of this vacuum for- I dunno- I am sad that she’s going. i miss her already. Oh well, time will eventually throw some other woman my way, I’m think that only reason I got laid was because the High Desert felt like giving me the Town Whore. Good times, I guess. Anyways,  gotta get some sleep. got work in the next ten hours.